An advanced directory application created by Microsoft for use on Windows servers. It is a critical part of Windows server and is used to set permissions, enforce critical updates, and run software on particular machines.

Asymmetric Digital Subscriber Line, or ADSL, is the technology that enables someone to use their telephone line for both data and voice, simultaneously.

Adware is any piece of software that automatically downloads or displays advertisements. The purpose of this is to bring in extra revenue for the developer. Although adware itself is not particularly harmful, it can be hidden in downloaded files and consistently pop up on a user’s computer. This can cause an annoyance, however a spyware cleaner can be used to remove any unwanted adware.

Backup refers to a user backing up computer data to a separate hard drive or to a cloud-based server. If a user does not backup their data, there is a high risk data could become lost or corrupted.

Bandwidth is the amount of data sent through a network or modem. Measured in bits per second, the higher the bandwidth then the more that can be transferred.

Short for binary digit, a bit is the smallest unit of information on a computer machine. A single bit can only hold one of two values: 0 or 1. Computers are often classified by the number of bits they can process at one time, typically 32 or 64 bit.

Broadband refers to a telecommunications signal that is of greater bandwidth compared to other solutions. Broadband is a fast way of connecting to the internet and allows faster download speeds than older methods such as 56k dial-up.

A browser is a software application that allows users to access information on the internet. Popular browsers include Microsoft Internet Explorer, Google Chrome, Mozilla Firefox, and Apple’s Safari.

A broad range of applications and technologies that allow businesses to analyse data in detail and can lead people to make more informed decisions, resulting in improved business processes.

A byte is a group of binary digits. Usually 8 consecutive bits, this collection of information can be used to represent a character (eg letter or number) on a computer.

A cache is a block of RAM that temporarily stores data that may need to be used in the near future. Internet browsers use cache to store certain data that users may need to access again without the need to wait for the screen to load.

This is the practice of storing content on remote servers that are connected to the internet instead of on your hard drive or local server. With cloud computing, less physical storage space is needed as files are stored remotely. It also brings the benefit of being able to access your data from anywhere that there is an internet connection. Cloud computing is highly automated and reduces the need for a large IT department to manage data.

Cookies are pieces of text stored by web browsers that can track user behaviour on websites or be used to remember preferences for future visits.

The Central Processing Unit or CPU acts as the brain of a computer. It is a microprocessor chip and does the vast majority of the data processing.

CRM stands for Customer Relationship Management. It is a piece of software used primarily by businesses and is a way to centrally manage all interactions with customers. There are various CRM packages including Microsoft Dynamics and Act by Sage.

A Domain Name Server or DNS is the hierarchical structure of how web addresses are constructed.

Electronic Data Interchange is a standard for communicating data between electronic devices.

This is the method of concealing information so that it is unreadable to unauthorised people.

Enterprise Resource Planning, or ERP for short, is a type of business application used to centrally manage all business processes and allow businesses to gain insights into how well they are performing in particular areas. SAP, Sage, and Oracle are well known providers of ERP software.

A part of a computer system or network that is designed to block outward or inbound communication by unauthorised personnel.

The Graphical Processing Unit, or GPU for short, is a microchip that is designed to process all graphical commands.

Normally located inside a PC, the Hard Disk Drive or HDD for short is a computer’s primary storage medium.

Hardware refers to all the physical parts of a computer or computer network.

Hypertext Markup Language is a coding language in which web pages are written.

An Internet Protocol address is an unique number system which is allocated to every computer connected to the internet.

The Internet Watch Foundation (IWF) is an independent self-regulatory body, funded by the EU and the online industry, including internet service providers (ISPs), mobile operators, content  providers, hosting providers, filtering companies, search providers, trade associations and the financial sector. Their self-regulatory partnership approach is widely recognised as a model of good practice in combating the abuse of technology for the dissemination of criminal content.

A LAN or Local Area Network is a computer network usually connected by cables that covers a small area such as a home or office.

Mobile working refers to the practice of people working away from their offices and needing to stay connected to the company network. This requires hardware such as laptops or smartphones, as well as a secure VPN (virtual private network).

A series of electronic devices, such as computers, that are connected together and can freely exchange information.

This refers to all the cabling, routers, switches and any other equipment that makes up a computer network. A network can be based on a variety of different technologies and can range from low speed dial up, to high speed fibre optic cabling.

The act of virtually separating a hard disk so that it behaves as though it were multiple disks.

Isolated school Internet that provides a vigilantly monitored connection that keeps students, staff and sensitive school data safe from any pitfalls that the general internet may present.

Random Access Memory (RAM) is temporary computer memory held on microchips. Instructions and data are held in RAM while the computer is in use and disappear when turned off. The more RAM a computer has, the more applications a user can run simultaneously.

Small Computer System Interface, otherwise known as “Scuzzy”, is a standard for connecting computers and peripherals together.

Serial Advanced Technology Attachment is a type of connectivity used primarily for hard drives. It is a replacement for parallel ATA.

Programs or applications that are run on computers or other electrical devices. Software can be stored on physical disks or stored on hard drives.

Secure Sockets Layer is a standard security technology for establishing an encrypted link between a server and a client—typically a web server (website) and a browser; or a mail server and a mail client (e.g., Outlook).

Transmission Control Protocol/Internet Protocol. This is the basic communication language that the internet uses.

Also known as an intercepting proxy, inline proxy, or forced proxy, a transparent proxy intercepts normal communication at the network layer without requiring any special client configuration. Clients need not be aware of the existence of the proxy. A transparent proxy is normally located between the client and the Internet, with the proxy performing some of the functions of a gateway or router.

A specific type of computer malware that manifests itself as a desirable application or piece of software. It looks harmless but when opened infects a computer and can allow hackers to steal information or cause unwanted harm to the device.

Unix (all-caps UNIX for the trademark) is a multitasking, multiuser computer operating system that exists in many variants. The original Unix was developed at AT&T’s Bell Labs research center by Ken Thompson, Dennis Ritchie, and others.

Uniform Resource Locator. A URL is a string of characters that when typed into an internet browser allows access to a specific page on the internet. A URL essentially acts as a gate to the world wide web. If a URL is not entered, an internet browser will not know the correct web page to access.

Universal Serial Bus, or USB for short, is a standard connection type used for a wide range of devices. It usually refers to the cables, connectors and ports that connect the external devices to computers. Printers, flash drives, mobile phones, TV sets, and a whole host of other equipment are often connected through USB.

This is the method of partitioning one physical server into multiple virtual machines. Each virtual server can run separate operating systems and performs in the same way a physical machine performs.

The process of making and receiving Voice transmissions over any IP network. IP networks include the Internet, office LANs, and private data networks between corporate offices. The main advantage of VoIP is that users can connect from anywhere and make phone calls without incurring typical analogue telephone charges, such as for long-distance calls.

A Virtual Private Network (VPN) is a private company network that uses a public network, such as the internet, to connect remote offices or users together on a LAN. The process of connecting to a VPN is called tunneling. All information is encrytped at the IP level to ensure a highly secure log on.

A Wide Area Network (WAN) is a computer network that connects a system of LANs over a large distance via fibre optic cables, telephone lines, or radio waves.

Windows is a series of operating systems produced by Microsoft.

Please enter the Page ID of the Facebook feed you'd like to display. You can do this in either the Custom Facebook Feed plugin settings or in the shortcode itself. For example, [custom-facebook-feed id=YOUR_PAGE_ID_HERE].

OIS @OakfordIS @OakfordUK: We have space in our afternoon session for Friday's FREE to attend cyber security event alongside our friends at @ESETUK! Register on the below link, we can't wait to see you! 😁🙌 #Oakford #Technology #ESET #AntiVirus #DataSecurity #Business #Event https://t.co/tg73pfuBiZ https://t.co/RVVoa3hSCy 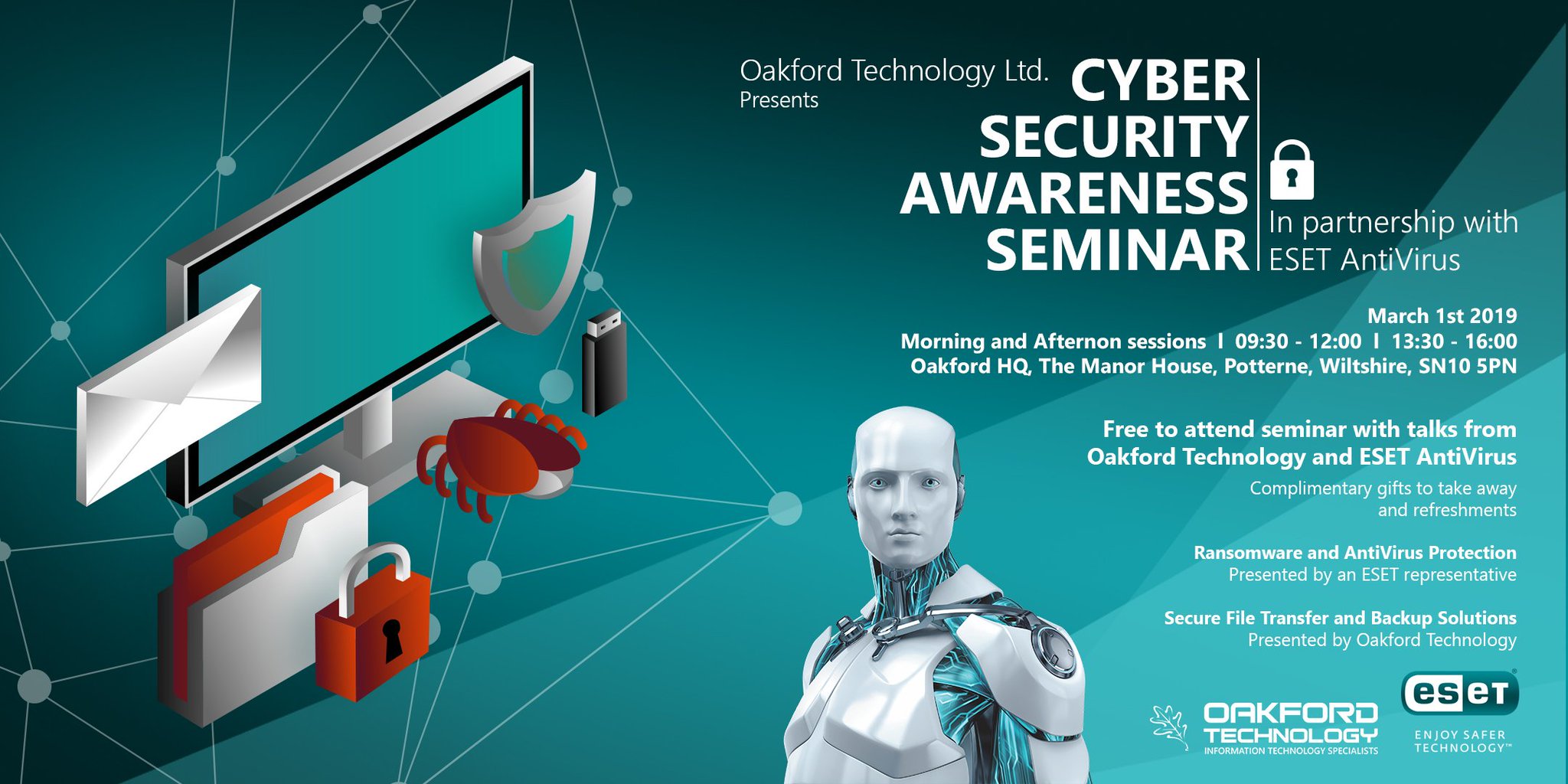 h J R
OIS @OakfordIS @Olli_Gee: Are you looking to develop a career in IT sales? We have the perfect place for you to start at Oakford Technology - https://t.co/GJzZlPf9yT #sales #IT #technology https://t.co/eoK9ISeBSL